In You Genius, U-Genix, Cortez and Amy Chen continue to infiltrate Crow's corporation.

Deep in the heart of the U-Genix building, Cortez and Amy Chen find themselves at the heart of Jacob Crow's secret research lab - but where is Crow and what exactly is he researching?

Use the LX-18 to destroy the bots around. If you are on hard, let Amy do the shooting, since her bot has infinite ammo. There are at least six spider droids you need to fight off to reach the residence module. Follow Amy until she gives instructions to look into the showers for a keycard.

Grab the red keycard from the shower room (there are no entities in this area) and head back outside to open one of the dormitories. Cortez will automatically disguise himself and pick up the injector. Although this new weapon is vital for survival, use the LX18 for now.

Head back to the security door and try to look normal. Pass through without firing on the guards or handling any switches. Instead, head upstairs to the PC terminal and access it.

Open the program for railbot control and use the alt-use key (check your binds on the PC version) to blast the guards. To get Amy into the mix, disable the scanner (which also opens the lab's door).

Head into the labs with a normal gun equipped. Amy will locate a sanitizer room that will allow Cortez and her to pass through into the clean area of the labs. Go through the sanitizer hall and fight the enemies who come into the lab looking for trouble. Amy will go through next (note, running through the sanitizer with Amy in hopes of seeing her drop her top will only cause her to disappear and reappear in the Dr Amy mesh). Head for the green lighted door and enter the clean labs.

Take Amy into the store room, blast the railbots and spider droids. The Dispersion Gun is great for these things since one or two shots wreck them. The SBP500 is best used for the organic enemies later.

Take the injector (actually just more ammo, unless you're on hard) from the scientist but keep the SBP500 around. Deal with the inceptors and guards and try not to lose too much life.

After leaving Amy behind at the terminal, take out the injector, but be prepared to switch to a normal gun if a non-mutant tries to attack you. Let the mutants attack the guards so you can pick up their ammo later. Use the injector (one shot should do it) to kill each mutant. The ensuing full body explosion is sufficiently powerful to kill or damage Cortez seriously, so fire and flee. The dart can be picked up later. In the maintenance area, pick up the flamethrower. While it is ineffective against mutants, you can use it with great results on the guards who attack near the holding cells.

The TK glove can still fetch items from restricted rooms, like the one pictured above left. Use the glove to grab items from areas Cortez cannot normally go to. Move through the holding area and use the flamethrower on the enemies up close. To unlock the door to the area where Crow is, head down into the holding cells and throw the switch there. Head back up, kill the enemies, then restock on the items inside the cells.

A new objective in Lab 8 is to kill all the mutants to access the next lab. Let all the mutants kill the guards, then let loose the injector. The mutants on the beds can be destroyed using the crane control panel. The tables can swivel on your command after you're done "processing" a patient. Head up to the next lab, needle gun in hand. Tip: Once you encounter the mutants, back away from any fighting going on. Your enemies will fight each other and reduce their numbers, making them easier to kill.

Kill all the mutants here, grab the power-ups and switch to the Dispersion Gun, if you still have ammo for it. The next part involves a complicated six event recursion, so Cortez will be doing two puzzles and three fights. (In multiplayer you just have to defeat a lot of railbots and spiderbots.)

Do the first connect the tab puzzle quickly. Similar to the one you had on Khallos' train. Connect the coloured tabs from one edge to the other and you trigger the next part. To help fight off the railbots, Cortez uses the time portal to transport himself back a few minutes to fight off the railbots. Kill them quickly using a charged Dispersion Gun.

Part three is another more complicated coloured tab puzzle. Focus on connecting one colour quickly and if there is a fault, you simply correct a few tiles instead of trying to figure out the whole thing from the ground up. With the board being limited, assembling a set of tiles into a pipe can help you connect the rest of the colours faster. Complete this part and get ready to fight more railbots.

The last part of the fight is to have Cortez fight off the spider droids while the other four Cortezes crack the previous puzzles. Crack all spider droids to clear this section. Use up the Dispersion Gun here, since there's a ammo pick-up for it later. During the boss fight, SBP500 ammo is respawned, so you will have something to fight with. Meet up with Amy once more and get ready to fight a boss.

Crow's security droids are flying bots with machineguns. Dance around them and fire -- auto-aim helps somewhat here since the droids are fast. Amy will be no slouch either and will take out one or two if you let her be. Down all four droids, pick up any SBP ammo in the middle and stay away from Crow. When all the droids are destroyed, you win. 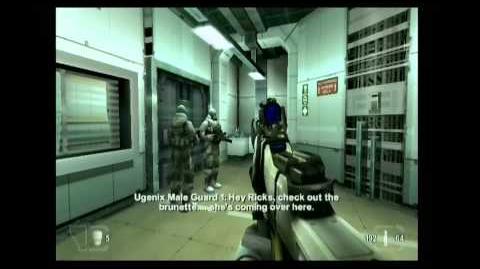 TimeSplitters Future Perfect Showcase You Genius, U-Genix
Add a photo to this gallery