Trooper White is a member of the Arctic Force in TimeSplitters 2.

Trooper White makes his first and last appearance in TimeSplitters 2. Despite being associated with the other Arctic Force Soldiers, he is the only one that does not appear in the Story level Siberia. He was (presumably) originally intended to appear in the level, but was cut for reasons that are not entirely obvious. Outside of Story mode, he makes a small appearance in a single Arcade League match, and one bot set. 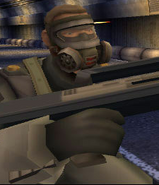 Trooper White in Siberia with the beta Assault Rifle.

Trooper White in Timesplitters 2.
Add a photo to this gallery

Military
Retrieved from "https://timesplitters.fandom.com/wiki/Trooper_White?oldid=45756"
Community content is available under CC-BY-SA unless otherwise noted.