Tomb is the 'first' mission in the original TimeSplitters, and thus the 'first' mission of the series. Presumably set in Egypt, the player takes the role of adventurer Captain Ash, or his assistant Lady Jayne, in their search for the Ankh, laying deep within. The tomb is protected by hostile Cultists, Priestesses and various undead.

Find the Cultist's ankh and return it to the shrine.

Start going straight ahead and kill Cultist with his back faced to you. You can go inside the crypt to collect more ammo and TNT. Go inside the tomb and shoot the boxes to kill a Cultist near them before he notice you. Keep following the path and kill the Cultist on your way. Go up and you will meet a patrolling Cultist. Finish him off and keep going. Shoot the middle box to kill a covered Cultist. Go closer and look at your left where a rolling Cultist appears. Approaching behind and kill Cultist on your right behind the boxes. There's a health kit behind on the right corner if you need it. You can either jump down the hole or down the ramp behind the hole. If you're going for the speed run, jumping down is recommended. Kill the zombies, and collect the Ankh inside. Go up the ramp and kill the Timesplitters and Cultist on your way. Three zombies appears with Tommy Gun, take them out. Go all the way back to start and kill the Timesplitters spawning on your way back who most often goes down in one shot. Go inside the crypt and step into the red circle to finish this level.

If you're going for the speed run, you don't have to bother shooting anyone as you have enough health to that. Shooting anyone can be a waste of time unless they're blocking your path which is usually on your way back. 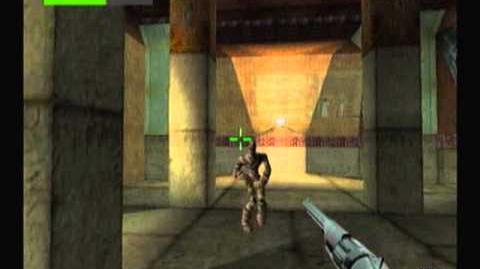