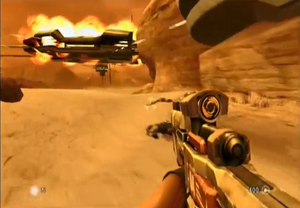 Time To Split picks up right where TimeSplitters 2 Story mode left off. After escaping the Space Station in TimeSplitters 2, Cortez flew back to Earth with the Time Crystals. The mission begins after Cortez's crash landing.

Sergeant Cortez returns from a daring assault on a TimeSplitter-infested space station. With him he carries Time Crystals stolen from the TimeSplitters which could bring the war to an end. On his final approach a laser hit causes his ship to malfunction and Cortez is forced to crash land. It is essential that he brings the crystals back to Spacetime Marine HQ.

Cortez starts off upside and is led by a fellow soldier to the base. Note the character standing on the cliff; this small detail is a major link to another mission. Follow the soldiers down the ravine and kill all the humanoid enemies firing at you. Follow the soldiers over the wreckage to the lower side of the ravine and move on. The Sci-Fi Handgun has a weak scope that will make it easier to score headshots from far away.

The large glowing green boxes are fuel cells that you can shoot and destroy enemies with. Target them first to conserve ammo. The boxes with a purple stripe on the ground are usually Grenades. The ones with a red stripe are medical kits. Armor comes in the form of a blue Kevlar vest. Ammunition comes boxes marked according to their weapon. One of the enemies you've killed should have dropped a Plasma AutoRifle. Be sure to take one and stow it away (normal and hard), since you'll need it later.

Take care of the enemies near the bridge by destroying the boxes. Continue on to an area which is defended by two of the humanoids with Plasma Autorifles. A soldier gives you a Sci-Fi Sniper and orders you to take them out. For saftey, activate the shield first, then step out and shoot the fuel cells behind the snipers. This will clear the nest.

Take out the Plasma Autorifle and prepare to fight a few TimeSplitters. Follow the canyon's path and keep a look out for the dust and the distinct shimmer that give away a TimeSplitter. Note that the TimeSplitters usually uncloak before they attack. They also turn visible if they are shot. You can also trace the origin of fire when they shoot lightning. Take out the few TimeSplitters here, or run towards the bunker. There is a heavy plasma gun ahead that Cortez can man. In 2-Player Co-Op, there are two turrets.

The plasma turret gun has unlimited ammo unlike your Plasma AutoRifle, so take advantage of it to destroy the waves of TimeSplitters who assault your position. Sweep the cliffs, then the canyon entrance you came from, then sweep back to the cliffs to your left. On co-op, each player can cover one side and in turn, each other. Once the splitter wave is stemmed, move on to the last battle.

Make sure to refill your supply with the grenades and power-ups strewn about before leaving the plasma gun, then move ahead to the next area. The objective here is to aid the Marines in defending the base. A good strategy is to hide behind the bunker and attack the splitters. There are more grenades and health pick-ups stored there, and you can throw grenades at oncoming TimeSplitters from behind cover. Kill 20 splitters (more on hard, less on easy) and the base's door will unlock, ending the stage. 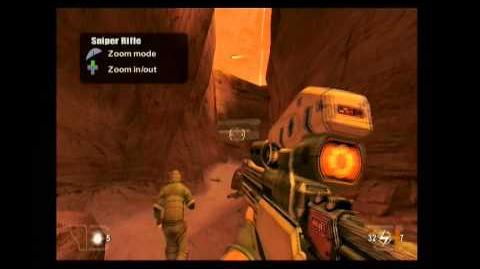