TimeSplitters 2 is the second game in the TimeSplitters series, released on October 2002, by Eidos, for the Nintendo GameCube and Xbox in addition to the PlayStation 2, which the original TimeSplitters was exclusive to. It received a rating of T from the ESRB and a 15+ rating from the ELSPA. The game has ten story missions starring Sergeant Cortez and Corporal Hart as they attempt to stop the TimeSplitters from destroying history.

This game ends with a cliff-hanger, followed by TimeSplitters Future Perfect, which is a direct sequel to this game, released in 2005, that starts off right when TimeSplitters 2 ends.

On November 15th, 2021, the Xbox version of TimeSplitters 2, alongside Future Perfect, were made playable on Xbox One and Xbox Series X/S via backwards compatibility.

The game starts in the year 2401, when Sergeant Cortez and Corporal Hart are sent to a TimeSplitter-infested space station, where a time portal is being used. Their objective is to retrieve the Time Crystals. However, before they can reach them, the TimeSplitters take them into different locations and time periods of the past. They must be followed and the Crystals retrieved.

Unlike the original TimeSplitters, each level in story mode contains objectives that must be completed before finishing the level. Also, the objectives depend on the difficulty level selected, which can be either Easy, Medium, or Hard.

Like all the TimeSplitters games, story mode can be played co-op.

Arcade mode is divided up into two parts: Arcade League and Arcade Custom.

The Arcade League allows the player to set their wits against a series of pre-set multiplayer matches. There are 3 leagues with 5 groups of 3 matches in each. Successful completion of a match will result in a trophy, coloured bronze, silver or gold depending on the criteria met. A silver and/or gold trophy is usually accompanied with new characters, arcade maps or cheats. In addition, a platinum trophy can also be earned for an outstanding performance in a match, but results in no additional reward. Each group is typically linked by a common theme. Any group can be selected from the start, but you must complete each match within a group to unlock the next in that group. At the beginning of the game, you will have access to only the Amateur League; completion of Amateur League matches will unlock the Honorary League, which in turn unlocks the Elite League when completed.

Arcade Custom is the main multiplayer mode of TimeSplitters 2. You can have up to 4 human-controlled characters and 10 bots. There is also a Network mode in TS2, which allows more than one console to be connected to each other for up to 16 players; however no bots are present in network games. An "Arcade Pace" function also allows the speed of characters, from "Chilled" being a slower average speed, to "Frantic" being a faster speed. The selectable modes are as follows:

The Challenge Mode returns, but this time is accessible from the beginning of the game. As before, the objectives are to complete set challenges in the hope of a trophy (coloured as in the Arcade League) and reward. Said objectives can be anything, from shooting the heads off zombies, to collecting bananas. Again, the challenges are found in groups of three, typically linked by a common theme. Completion of challenges unlocks the next group, and so forth. Characters, weapons, and maps can be rewarded for good performance as well. Gold trophies are needed to unlock the maximum characters for that specific mission.

Aside from its NSTC and PAL releases, TimeSplitters 2 is unique in the series in that it was released in Japan as Time Splitter: Invaders of History (タイムスプリッター 〜時空の侵略者〜 Taimusupurittā ~Jikū no Shinryaku-sha~) for PlayStation 2. This version of the game is missing the Mapmaker.

The Xbox Version of TimeSplitters 2 is currently not backwards-compatible on Xbox 360, but there have been petitions on the Xbox websites for the game to be included in the next system update.

The main reason is because the part that controls the Xbox Controllers, when the Xbox 360 is in Xbox Mode, seems to not being able to send the commands right. This can be checked with a modified Xbox 360. 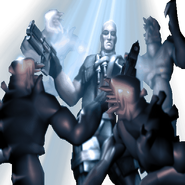