The TimeSplitters are an alien race who travel through time, space and dimensions. They are the main antagonists in the series and were created by Jacob Crow as "humankind's genetic superiors". There are five types of TimeSplitter in the whole series, all vastly different in appearance; no real explanation has ever been given as to why the TimeSplitters have changed so radically from game to game. Despite their title, the Drone Splitters are not TimeSplitters. They are an entirely separate race of aliens altogether; they were enslaved by the TimeSplitters and controlled through the use of spinal implants, according to their TimeSplitters 2 gallery description.

During the events of TimeSplitters 2, a group of TimeSplitters took control of a Space Station, and kept the Time Crystals in the science bay, along with their Time Portal. However, when Sergeant Cortez and Corporal Hart arrived on the Space Station to steal the Crystals, the TimeSplitters started moving the crystals through time, so it would be harder for the humans to retrieve them.

Finally, during the events of TimeSplitters Future Perfect, an army of Berserker Splitters led an attack on the rebel base, which was possibly an attempt to stop Cortez getting the Time Crystals back there. The TimeSplitter mothership was shot down by Cortez, in an attempt to save his past self, and to stop any more advances of Berserker Splitters.

The TimeSplitter army created by Crow was done so during the Machine Wars, which Crow actually started. Crow eventually turned himself into a TimeSplitter to gain his lifelong goal, eternal life.

The TimeSplitter storyline actually goes backwards throughout the series, starting with Crow breeding the creatures in Future Perfect, then the 'Splitters hijacking the space station in TimeSplitters 2 and using the time portal to travel back in time to stop important events in history during TimeSplitters 1. 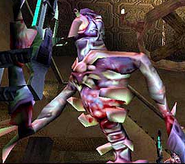 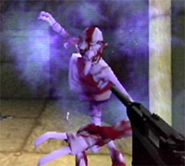 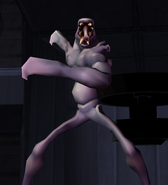 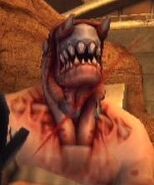 Berserker Splitter
Add a photo to this gallery
Retrieved from "https://timesplitters.fandom.com/wiki/TimeSplitter?oldid=44963"
Community content is available under CC-BY-SA unless otherwise noted.