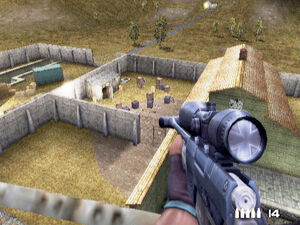 In The Russian Connection, Cortez must team up with special agent Harry Tipper and aid him in saving Kitten Celeste from Archibald Khallos, as well as finding out the whereabouts of the Time Traveler.

Cortez follows the mysterious Time Traveler from 1924 Scotland to a Stanizlav Train Depot, Russia in 1969. Here, it seems that the Time Traveler is leading a cult and has teamed up with the arch criminal genius, Khallos. A potentially lethal alliance but no match for the combined talents of Cortez and super chilled agent Harry Tipper!

At the start of the level, make sure you are as stealthy as possible. Also, make sure you look all over the place, there are weapons and health packs waiting to be picked up.

When you're in the base, try to bring the car as far as you can. It'll come in handy. For example, you can drive it through a room and kill enemies without taking a lot of damage.

Harry Tipper will hand over a pistol. Keep track of the eight shots or expect it to run dry quickly. Put on the scope (secondary fire) and snipe the guard in the guard house. Once he's dead, three guards will exit the red house. Wait behind the stack of boxes and wait for the female guard to come into view, then snipe her. Then, snipe the other two men, but without them noticing each other's deaths, or you.

Once that's done, you can enter the red house and take down the other guards to acquire some body armour. To do this with minimum risk, open the door to the room the two Henchmen are in, to make them notice you. Then, quickly shut the door, and move to the right, under the stairs. They will re-open the now-blocked door and come out, but cannot shoot you through the door, nor can they go around it (due to the stairs). Go up to the door and melee them to death (melee attacks work through doors, apparently), push the door open, and get your armour (there will be two sets of armour on 2P). Then, head to the canal, where Harry Tipper will be waiting for you.

Follow him through the gate and head up the stairs. Take out the guard in the corner and move through the break in the wall. Anya recommends a stealthy approach since Cortez lacks a machinegun. Inch past the wall and look for guards patrolling the grounds. Remember to fire with the scope attached; it is also the pistol's silent mode.

There are nine guards in various positions on the ground; six more will be spawned if someone catches sight of Cortez. Snipe them with your scoped-and-silenced 9mm; make sure to hit them in the head! They will immediately discover your position if hit elsewhere. Here's a good and safe strategy for taking out the guards, but try and be creative:

You don't need to be stealthy any more, but it's always good to be careful!

If you get caught, don't fret. Try to find a place where all the henchmen will have to approach you from one place, like the area where the first henchman was killed. If you lack the patience to do that, get their jeep and run them over.

Tipper will come out of the sewer and start laying out his plan. Head up the ladder of the water tower and pick up the sniper rifle. There are two yards that Harry Tipper raids; simply kill all the enemies attacking Harry and he will move on. Linger and his life will expire and it's game over. Simple. Aim for the heads of enemies and take time to place your shots. When the reload animation takes you out of scope view, engage zoom again to get back into the scope view. Sniper ammo is infinite, since ammo boxes respawn behind Cortez. Once Harry Tipper raids both barracks, Cortez needs to head across the plank and into the roof of the building.

Enter the large blast doors and don't fire. Select your machinegun, but don't fire or kill anyone until the next phase of the mission is done or you're in for a hard time. The sector to where Khallos is has no power, so you need to re-route power to move on. Anya says the power reactors are in the basement, which is locked.

Head into the small machine room where an engineer will remark that he'll be checking something in the basement. Kill him whist he is still speaking and pick up his pass card. Go back the way you came and then go down into the basement.

Move past the turbine room and make way to the end of the water sluice. Opening it will cause an alarm. Once the water starts flowing, take out the machinegun and wait patiently for the enemies to come in to "check the problem". Assassinate them as they come through the door and head back up to hit two switches (one is in the basement).

Once the door opens, you can follow Harry Tipper down the stairs or take the jeep and drive down the ramp. At the bottom, make a hard right and run down the enemies quickly. Shooting them is also possible, but you may need the ammo for later. Tipper will leave temporarily to deal with hostages. Yes, you can shoot the monkey, but not the rich girl. Get back into the jeep and drive down to the next level.

Anya mentions something about a blast door -- there's no way through it yet so head down the hall. The first door on the right side is filled with enemies churning out counterfeit money. Drive the jeep inside and run them down, or kill each enemy here and now. Clear the hallway of the jeep and any debris, then head down to the last door, which opens into a firing range. A gun shell is loaded on the rack; use the TK glove and lift it to the blast door (hold the fire key). Release the shell and blow a hole you can continue through. Should you miss, head back to the room you found the shell in, go over to the conveyor and stand beside the little lever on the left, press action and another shell will be generated.

Head through and run down enemies using the jeep or gun them down. Continue on foot through the narrow hall to meet the mystery time traveller and kill the last of the opposition. Once done, the stage ends successfully with Cortez playing a big game of catch up.