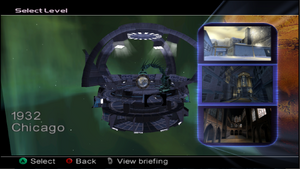 You start off facing the bunch of crystals, so ignore everything else and grab them. Turn around and shoot the TimeSplitter who killed Corp. Hart. As soon as you've killed it run for the door opposite the Time Portal as a swarm of insects will try to kill you. Take a left in this corridor and activate the machine you come across on your way down. Go through the first door on your left and follow the path along the left. You'll find armour and ammo. Go through the door marked "level 2". From here take a right and keep walking (ignore the door on the right) until you reach an active terminal. Activate that too and keep walking, ignoring doors until you come to the third and last terminal (you will pass one you've already activated on the way). Activating it will initiate the self destruct timer.

Keep going in the same direction and take the first door on your right. From here drop to the lowest floor. Take the second door on the right marked "hangar". It will lead to a corridor containing a reaper splitter. After killing the splitter, go through the next door which takes you to an elevator room. Activate the switch on the right and wait for the elevator to come up. In the meantime kill the TimeSplitters who have congregated around you. You're bound to take some damage - don't worry. At the bottom go right through a door which leads to a room with Baby Drone Splitters. Aim low and kill them then take the armour and the ammo on the left. Then go to the end of the room and take an outdoor suit from the wardrobe. Now backtrack to the elevator. Enemies will attack you all the time.

Take the left path this time and go through three corridors, all containing Reaper, Drone or Scourge Splitters. Keep looking back, as more arrive. By the time you are in the third corridor the timer should be no lower than 6:30. Ignore the path on the right and keep going into the next corridor. Here are more Drone Splitters and one Reaper Splitter; you may want to consider using your plasma grenades for quick kills. The door at the end leads to another corridor with a door that you have to open manually. It leads to an airlock. By now you will have been told to shoot down the incoming TimeSplitter fleet. You'll have to wait a few seconds then you'll be able to open the next door too. You'll emerge in an outside part of the station. Normally you'd suffocate, but because of that suit you'll be fine. There's ammo and armour if you need it and a mounted gun. You have 600 bullets with which to shoot a small fleet of ships. Zoom in and shoot the ships as they come. Be alert as they can be hard to spot at first. Try to get all three at once, and remember that they come in threes at all times. Take out any stragglers and you'll finish the objective. Now go back to the corridor to the T-junction and go down the passage I told you to ignore earlier, staying alert for TimeSplitters.

Open the door at the end of the corridor and you'll come a corridor with a shelf. On it is some armour and a Minigun. Go left and use the secondary fire mode to keep the minigun at the ready at all times. Kill the Scourge Splitter who runs up to you then kill the Reaper Splitter at an intersection with two doors. Take the right door and you'll be in an elevator room. Go round to the other side and call the elevator. Also kill the TimeSplitters in your way. Ride the elevator downstairs and exit into the hangar. If you have less than a minute just run straight into your ship which is opposite where you enter. If you have a little more time and you feel like it you can kill some TimeSplitters first. Either way, entering your ship will finish the mission and the game.

Although nothing compared to what you've been through, this is still a challenging mission. It's the same in all three difficulties, but Hard mode gives you a measly five minutes to get out, as well as hordes of enemies. You'll have to be really quick to get out in time.

Grab the crystal from the machine and jump down to the bridge on the middle level (not the bottom floor). Go right and collect the armour and ammunition. Go up to the door then back away again as a bolt of electricity crashes into it. Now run through and go right. Run round the circular exterior of the room, activating the three lit-up consoles as you go. After activating the third a five minute timer will start.

Head out into the big room again. You're on the ground floor. Go right and take the first door you see, dodging out of the way of the electricity bolts the Reaper Splitters throw at you. Run down the corridor, shooting the cloaked alien, and enter the elevator room. Run to the right, press the button then &nbsp kill the first scourge splitter. Turn around and shoot the second behind you. The elevator should be up by now, so get on and strafe to avoid any electricity bolts.

On the next floor go right and look up the other side of the archway. There is an autogun. Put a grenade onto it then head left to the door. Open it and shoot a grenade onto the autogun in the middle of the room. Turn around and shoot the TimeSplitters who followed you down. Keep going through to the next room and shoot the baby drones. At the other end is armour and a space suit. Collect them both then turn around and run through the mass of TimeSplitters who have turned up. Shoot a couple as you run then enter the room where you shot the second autogun. There will be scourges here, so concentrate on shooting them as you run. The next room has another autogun so grenade it and keep going.

Now's the time to turn around and shoot the many TimeSplitters following you. Strafe and shoot until they all die. Then head on to a T-junction with a couple of Scourge Splitters guarding it. Chuck a grenade on each then dodge behind a wall. When they're both dead run into the next room (not right) and shoot the autogun. Run straight for the door at the end and open it. As soon as you're through close it behind you and head through to the outside world. A couple of TimeSplitters may have followed you so eliminate them and collect the armour and ammo out here. Get over to the gun and use all your skill to eliminate all the ships as soon as they come. There are eighteen in all, and you should destroy them in about a minute.

Hopefully you have about two minutes left. Head through the doors again and come out on the other side shooting. The TimeSplitters have refilled their ranks and the Reapers and Scourges are back in force. Go left down the corridor at the T-Junction and shoot a grenade above the shelves opposite. It destroys the autogun there, letting you safely collect the armour and minigun. Set the minigun to secondary fire and run left down the corridor, mowing down the Scourge Splitter you meet. Switch to autorifle on the start screen and blow up the autogun in the next room.

Go right into a room with elevators and shoot another autogun above the left in front of you. Go round to the other side of the room, shoot the autogun in the same position here and call the elevator. You should have about 45 seconds left. Get your minigun out and blast away at any TimeSplitters who followed you. As soon as the elevator arrives jump on it and send it back down again, all the while strafing and shooting (don't worry if your gun overheats). Ride the elevator down, which takes about thirty seconds, and as you are slowing down jump out of the front as soon as you can. Make a mad dash for the ship straight in front of you.Entering it in time unlocks an arena and a cheat. 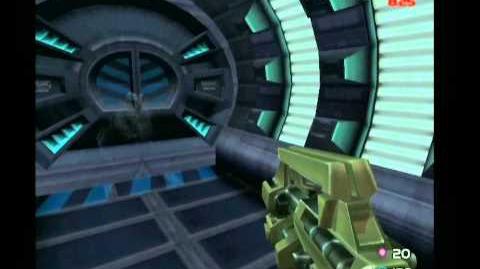 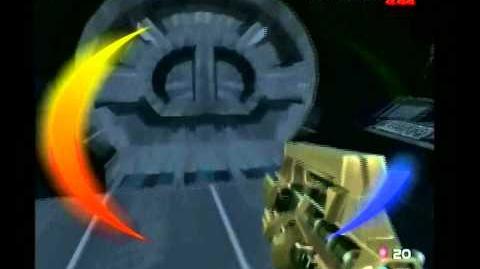 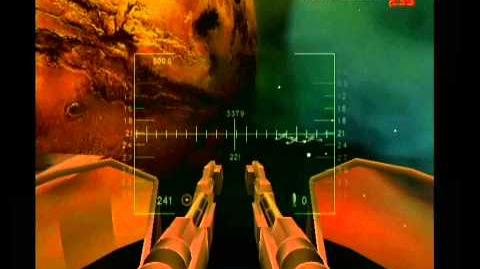