Something To Crow About

Something To Crow About is a story mission in TimeSplitters Future Perfect set in 2243. Sergeant Cortez and R-110 begin to explore the UltraNet base.

Far beneath the war-torn city, Crow's UltraNet base houses his war machines, battle tanks, robots and who knows what else? What exactly has he been researching for 200 years? - Genetic modification? - Time travel? - Immortality? - Perhaps even all three!

First off, don't fire. Listen to R110 and Anya as the lift descends. R110 will hotwire the door and you can enter the base with little trouble from the patrolling flying robots. Enter the bar and kill the bartender. This gives you a place to duck from the enemies and to shoot reflective shots from safety. Kill all the robots so the R110 can open the next door.

Past the bar is an electrotool. Open the case and take the weapon to continue. Shielded robots can be stunned using this weapon and then shot in the head using any other weapon. The electrotool can also disable shields by frying them. These are the laser barrier shields you found earlier in the U-Genix lab. Roast them using the electrotool to bypass each one.

Head down into the tunnel and zap the shielded robots. Place a plasma grenade on them if you don't have time to swap weapons. The "droidkas" can be stuck with a plasma grenade and it will usually unroll right at the explosion. They are invincible while they are rolling.

At the walkway, run up to the top and hit the lift switch before R110 or Cortez sustains terminal damage. R110 will be out of the picture for a little while, meaning Cortez will need to be cautious in dealing with enemies.

The lift leads to the factory's power core. To destroy it, you need to lob a plasma grenade into the core's opening, which unfortunately, is on the bottom. Disable the flying bots first. Then look for the two control panels on either side of the core. Activate both and run past the enemies to the next hallway. Head down, using the explosive boxes to destroy enemies and take the lift down.

At the bottom of the core chamber, watch for enemies (the droidkas especially). The small lightning will not hurt Cortez, but everything else will. Pay particular note to the very large, very accessible door in the core chamber. A boss will come out of there, so be aware of that. Waste the droidkas and enemies here and do not stock up on grenades just yet (there is a pick-up on the overlook at the sloped end of the chamber). Toss a single grenade into the core's opening (see above left illus) and take off to the sloped end for more grenades. Take them and immediately head back down to zap the incoming warbots.

The Goliath appears momentarily along with two droidkas from behind. Stick the droidkas with a plasma grenade each and avoid their guns. Then place the rest of the grenades on the Goliath. Then using the vertical obstructions, play hide and seek with the boss and chip away at any part of its body to destroy it. Look for power-ups before leaving.

Enter the next room and locate the supergun. There is a control panel on the base. Operate it and hold the fire key to unleash untold destruction. There's got to be a patch for including this bad ass mo'fo in the Mapmaker ... otherwise the designers are real sadists. Bwahahahaa. Hold the fire key down and destroy the incoming enemies. But blast the power rod to continue.

Exit through the hole, but watch out for the shielded enemy at the door. The maintenance section should be an easy time, although there is a single droidka at the very end. Try ducking to get a better view under the large pipes and you can knee-cap any potential hostile on the other side.

The birthing chamber has several enemies who are shielded and who will warp in. You may want to turn the Weapon Switch option off here, since there is a minigun and a rocket launcher that will screw up your current tactic of electrotool and then plasma rifle. Clear the area of enemies -- the last batch will be three black beret babes who unlock the lift to the upper floor. Pick up the minigun and rocket launcher. You will need them later.

Stay where Cortez gets off the lift. A roller droid will swing by -- if you have any plasma grenades left, place one on it and shoot it to get it to unroll. Alternately, you can use the rocket launcher on the droid after it unrolls. Take a left from the entrance and operate the control panel. It will send a power core towards your way. Use the electrotool to fry it and immediately head in a clockwise or counter-clockwise direction on the catwalk. Several enemies will appear from a lift Cortez can muscle past.

Take out the flying robots who destroy the energy bridge. To get by, use the electrotool to power the pylons temporarily to solidify a bridge section. Fry each pylon once and keep moving across. You do not need the electrotool, so use as much of it to get across the bridge.

Head inside the mansion and fry the enemies within. Do not open the main door until you've cleaned out the place of power-ups. Take any weapon (the minigun or plasma rifle is best) and fight the boss. The boss has weapons that need to be destroyed to beat it. Aim at each weapon while staying close to the columns to avoid the explosions and return fire. Expend all the ammo you need on this boss and pick up refills in the corners. Once all the weapons (highlighted by coloured circles) are blasted, you win. 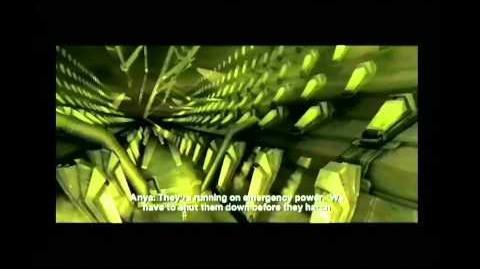 TimeSplitters Future Perfect Showcase Something to Crow about
Cortez's Chronology
Community content is available under CC-BY-SA unless otherwise noted.