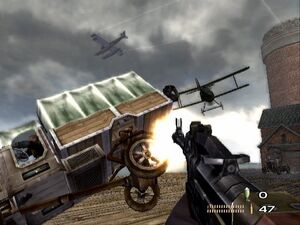 In Scotland The Brave, Cortez teams up with Captain Ash to save the Jungle Queen and try to find the source of the Time Crystals.

Cortez has been sent back in time to Urnsay, a small island off the coast of Scotland to investigate the time travel energy residues which Anya detected.

On arrival he finds himself in the midst of a battle raging between the British Navy and foreign troops occupying the island.

Fortunately the eccentric Captain Ash has offered to lend a hand. What ho!

Cortez is equipped with the Temporal Uplink, replacing fists. However, Cortez can still punch by using the melee attack while the uplink is equipped. The uplink has two useful features: A radar, similar to the one in TimeSplitters 2, and the ability to pick up objects. The radar, which can be activated in the uplink's secondary mode, is useful in this level for navigating around the complex castle. The primary function is telekinesis, which allows Cortez to pink up virtually anything except enemies.

Captain Ash will give you a pistol. To your left is the rowboat; take the Flare Gun inside of it. Head up the road and hide behind the awning. One fast but dangerous strategy is charging in and clearing the bunker that has three enemies. The second safe strategy is to attach the silencer and carefully place headshots at the two enemies in the bunker. Charge towards the bunker, and a bomb will pick off the third. A Vintage Rifle is in the bunker, take it. Continue up the hill; avoid the house, as it'll be bombed. Three enemies will appear on the hill. You'll hear one yelling orders -- simply take aim at the top of the wall and kill the ones you see. The final enemy is manning a Gun Emplacement. Ignore him for the moment, backtrack to the house next to the bombed one. It contains five grenades that can prove to be useful. Quickly charge to the bunker; if you're lucky (occasionally, the bomb won't drop) a bomb will take him out. There should be an enemy above the castle entrance. Use your rifle to snipe him. Behind one of the houses near the cliff edge there should be an enemy with double Krugers. Kill him to get dual pistols. Captain Ash and Cortez will be trapped in the lower castle. To escape, follow the right wall (after getting the cutscene) to a stairwell, taking out enemies. Cortez will pick up a K-SMG from one of the enemies on the stairs. Use this weapon to blast upstairs to the portcullis switch. There are two -- one opens the gate leading back outside, the other opens the way onward. Once the correct one is opened (Anya will mention the correct one), the water level at the bottom of the room will rise, raising up a gunboat. The gunboat will force Ash into hiding, and you have to take out the gunboat. Don't go downstairs, as the gunboat will unleash a powerful barrage of bullets that will easily kill you. Locate the crane controls and operate them. As soon as you have the turret clamped (by holding the action key), Release the button. Before leaving with Captain Ash, check the first floor for grenades. Outside, shoot out the skylight and toss a grenade inside. It will take out a few enemies inside. Move down the hill and attack the enemies in the garage. There is a health kit (second floor), grenades, and Vintage Rifle ammo inside. Grab them before getting on the truck. You can have Cortez drive or gun (Captain Ash will be gunner or driver, opposite Cortez). Move up the road regardless who is driving. Ride the truck through the gate. Take out the enemies on the ground and hop off when the gun emplacement starts firing. Fall back under cover behind the truck and snipe the gunner first. Use the uplink as Anya recommends on the level switch across the chasm to lower the bridge. Get back into the truck and drive up the last half of the road. Stop near the overturned truck, grab the TNT and place it on the left door. The TNT respawns so don't worry about misplacing it. Go inside and kill the six enemies in the immediate room. Captain Ash will leave momentarily to signal the army to stop the attack and Cortez will meet himself from a time paradox. Head down into the cellar (past the drunk guard) and head up the lift. Captain Ash will not be around to help you out anymore, so move carefully through the castle halls with the K-SMG fully loaded. Take out the first guard on the right using a silent weapon, then when the second and third guard investigate, blast them using the K-SMG. Don't stay in the hallway -- the third guard usually fires through the open gate and with the second guard, can "trap" Cortez. Wipe the floor clean before heading upstairs. Inspect each room for ammo and power-ups, head upstairs and blast the guards in the dining hall. Throw grenades down the hatch and waste all the guards in the dining hall. Use the K-SMG exclusively now, since the Kruger's ammo will be useful later. Before heading up the stairs after killing everyone in the dining hall, look for the kitchen and kill the enemies there. Once that's taken care of, Cortez can safely take out the two or three enemies in the 3rd floor bedroom and be relatively unscathed. Don't miss the K-SMG rocket shots in a small study on the 3rd floor. This is what you'll be using for the tank.

The periscope room has enemies inside. Feel free to toss any grenades you didn't use inside. Without grenades, it is not necessary -- just shoot any part of the enemy and they will come out, making themselves targets. Move across the walkway overlooking the courtyard and meet up with Captain Ash and his "assistant".

To free the assistant (and incidentally unlock her in multiplayer), go into the next prison cell over and locate the red drum. Note this drum has a limited amount of petrol. If you shoot the wrong spots, you will not free the assistant. Take the Kruger and shoot the barrel from top to bottom. Repeat, shoot the barrel from top to bottom. This makes the biggest pool of petrol possible, especially if you wait for the leaking to stop before you make a new hole. Shoot the lantern in the same prison cell and ignite the spilled compounds. The ensuing explosion should be large enough to free the prisoner.

Head downstairs and change to the K-SMG grenade. When Cortez heads past the door, turn left and run down the ramp. The tank will appear and start looking for Cortez. To destroy it, use the K-SMG grenades to cripple the tank to a crawl, then run up and place some TNT on the boss. There are two spots that respawn K-SMG rockets and TNT near the ramp you're on. Use the TK glove to drag the boxes towards you, safe out of the tank's sight. Repeat and wait for the ammo to respawn and destroy the tank. K-SMG rockets applied directly to the tank also work. Destroy the tank and head into its lift. Open the door on the other side of the bridge to end the stage.

Before the tank battle, if playing Co-operative, let one of the players go through the door and the other stay behind. Let that player pick up the weapons around the area where the tank comes out and battles you. But, since it's just one of the two, the tank won't come out. After the player is done, let the other do the same thing. Then after you repeat the secret, both of the players should come out and fight the tank with a lot of ammo.