Return to Planet X is the fourth Story level of TimeSplitters 2. In this mission, you take control of Hank Nova in his mission to get to the crashed UFO on Planet X.

There's been a lot of UFO activity in the Gamma sector - the Academy has traced their telemetry to Planet X.

The Ozor and Meezor Mox have been battling to gain control of the planet for some time now and we suspect that factions are constructing ships and launching them from a subterranean base.

Perhaps it's time to take a trip down to the surface and see what you can find out.

This will be a tricky mission, but the fighting between the Mox can be used to your advantage. Remember the Ozor and Meezor hate each other more than they hate you!

Don't be afraid to fight for one side or the other as long as it helps you get closer to the base!

Immediately run forwards when the mission starts and collect your sci-fi handgun. Then turn left and drop down through the hole there. It will prevent you from taking too much damage from the UFO shooting at you. Down here you should take the right path, blasting the green alien you see, then go right through a gap in the wall. From here go right, and kill the alien that appears in front of you. Take the weapon part behind it and go left. You will need to kill a sniper on a bridge in front of you and another alien who appears in front of you suddenly. Turn the corner, fall down the hole and collect the armour in front of you. You'll find yourself in a large "beach"; go to the edge and a raiding party will appear in the form of three UFOs. Behind you is a mounted gun - press the action button in front of it and get ready for a big battle. You'll be told to repel the beach attack, so use R to aim and kill all the aliens that appear. There are approximately 15 that you have to kill, and remember that they sometimes sneak up on you from behind. When the attack is over go out and collect all their ammo - you should get the awesome plasma autorifle. The gate previously blocked by lasers will open once you finish the objectives, so go through it. There is some autorifle ammo and the gun (in case you didn't get it) as well as an unarmed Mox (kill him if you feel cruel; otherwise ignore him completely).

You'll come to a circular canyon with a lot of weird insects in it. Just run through them - trying to kill them will result in the loss of a lot of health. All you have to do here is shoot their nests to kill a few of them then run through an opening on the right. There is some armour here. You'll soon find a large open area with a spaceship (locate the crashed UFO: Complete). Using your autorifle shoot the aliens attacking the ship, and soon some rival aliens will get out and help you. When the attackers are dead (tick off another objective) kill them before they kill you. Then enter the teleport to enter the UFO. Inside, go right and up through the large gap to get into the outer rim of the craft. A TimeSplitter will appear - kill it and walk clockwise to a small chamber containing the crystal. Then exit through the same gap and go into the time portal.

This, along with Chicago and Wild West, is one of the only fun missions in Hard mode in that it is both challenging and not frustratingly impossible. The music is cool and there's more to the level than the ridiculously short Easy mode version. The enemies will either have Sci-Fi Handguns, Plasma Autorifles and Plasma Autorifles that shoot RED lasers, kinda like a Lasergun/Plasma Autorifle mix. Dodge these at all costs.

As soon as you start run straight for the gun and jump down the hole. Restart if you get hit. Run along the passageway and shoot the first guy who comes round the corner. A little further along is another Mox. Kill him and aim upwards. You'll see a sort of bridge thing - shoot the guard standing on it. The next corner has a gun located on the floor. Pick it up and aim ahead. There is another Mox on the floor and an enemy on a bridge above you. Further along are three Mox - some spawn, so listen out for the familiar noise. When you emerge on the beach you should aim to have full health - you'll lose a lot here.

Run up to the higher part of the "beach" and get behind a gun. This part really requires you to have decent reflexes, accuracy and skill. A walkthrough cannot really help. I can tell you two things though - if you get hit look on either side of you as there are probably guys shooting you, and make sure you don't run out of ammo on the gun. Having to change gun will almost certainly get you killed. When the attack is repelled collect the Plasma Autorifle, the masses of ammo on the floor and any armour left behind on the path then exit through the door that opens.

You're in an insect area. They sting, so run your ass off to the other side of this circular place. The path from here leads to the crashed UFO. There are several Mox and the second half of the Homing Launcher to pick up. There's plenty of armour from here on so don't worry too much about health. When you reach the UFO stand near it and shoot at the Mox who get beamed down. Kill them as they arrive and soon some rival Mox will appear from inside the spacecraft. Let them fight it out then mop up any survivors. Enter the ship after that. It's large and you appear in the middle. Get into the outer rim through one of the square doorway things and follow the path until you reach a hole in the floor. Drop through it to reach a checkpoint.

You have a choice of paths here - you can go left to a dead end that leads back to the start with a few enemies on the way or you can go right to the end of the level. This walkthrough only covers the latter, as it is for sane people. The path is winding, and there is a Mox at practically every corner. Just gun them down when they appear. You'll soon arrive at a huge area with a metal floor and what looks like the entrance to a hangar.

The rival factions are here in force, and are busy butchering each other. Let them get on with it and stand back in the corridor so you can see an enemy if it comes from the area. Soon several aliens will come and attack you, and you can shoot them as soon as they appear, taking no damage. When you think the coast is clear venture out, but check the ledge above near where you entered for a sniper.

Go to the doorway roughly opposite the entrance and kill the Mox hanging around there. It is leads down another path which eventually gets you to a metallic looking place with several aliens. These lead to guns, and you should enter and go to the far little cabin. There are controls for a gun there. Activate them and wait for the UFOs to appear. Shoot down enough and the objective is complete (check your objectives screen to see how many are left to destroy).

When you're done you can follow the path again, which leads into the alien base. As well as the Mox you also have to look out for cameras. Use your Handgun to take them out. There is one near where you enter, another round the corner and a third in the large UFO chamber. Eventually you reach a teleport which takes you back inside the crashed UFO. The Time Crystal is now located in the outer rim of the craft - go and collect it. The Time Portal appears, as well as some 'Splitters. In this enclosed space it's hard to dodge their electricity, so let's hope you have enough life left to make it to the Portal. 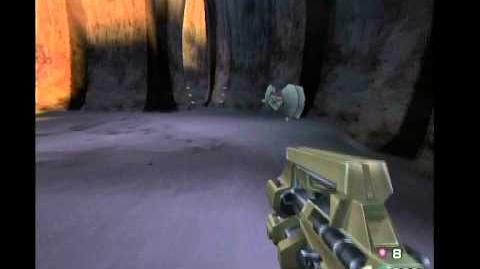 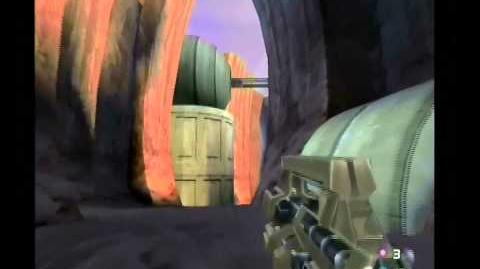 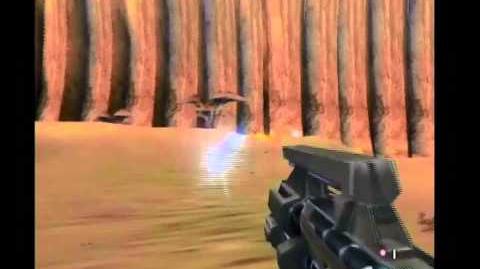 For a full gallery of Return to Planet X, click here.