Start a Wiki
The Reaper Splitter are the brute fighters in the TimeSplitters' forces. They are able to release blue bolts of energy, and have the ability to teleport. These TimeSplitters are the only ones which appear in the cutscenes of TimeSplitters 2. They have a characteristic open mouth, and their arms resemble scythes, where their name most likely stemmed from.

An interesting characteristic about Reaper Splitters is that if an AI bot is a Reaper they will instantly kill another character in usually one (rarely more) punch.

The ancient remains of a single Reaper are present at Oblask Dam in a biohazard container. After being found in an archeological dig, Soviet scientists attempted to extract its DNA to create super-soldiers, which ended in failure. No live TimeSplitters actually appear in the level.

The TimeSplitters travelled with a Time Crystal to the Notre Dame Cathedral in Paris. Jacque de la Morte believed them to be Angels of Time, and so he worshipped them, sacrificing innocent Maidens to appease them. Their 'evil aura' is said to have brought the cathedral's stone gargoyles to life.

On Planet X, the TimeSplitters attempted to interfere with the Mox Civil War. They gave one of the crystals to the Mox, in order to hide it from Sgt Cortez.

A gang in the Tek Quarter of NeoTokyo have stolen a cyber-rig, which they have combined with a captive Reaper Splitter in order to power it. The Time Crystal is possessed by the gang's leader, Sadako.

A Time Crystal was hidden within the mines of Little Prospect. The Colonel and his gang tried to retrieve it, with the Reaper Splitters appearing after it is uncovered.

The natives living in the Guatemalan jungles had one of the Time Crystals. Guarding the Lost Temple of T'hochek, which housed the Time Crystal, which they believed to be the "Jade Crystal" of legend. To these natives, the TimeSplitters were thought of as gods.

The Dark Machinist Child had another one of the Time Crystals, while hidden deep within his factory, producing robots to recommence the Machine Wars.

Sergeant Cortez had returned all nine of the Time Crystals to the Space Station. Just after this achievement, the TimeSplitters broke through and defeated Corporal Hart. Cortez charged through the TimeSplitters, activating the self-destruction of the station. Getting away from the station, he watched it blow up, along with all the remaining TimeSplitters on-board.

A Reaper Splitter in Training Ground wielding a Tactical 12-Gauge.

Reaper Splitters in the Space Station. 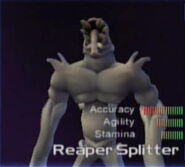 Character select.
Add a photo to this gallery
Retrieved from "https://timesplitters.fandom.com/wiki/Reaper_Splitter?oldid=46260"
Community content is available under CC-BY-SA unless otherwise noted.