During The Machine Wars, R-110 served in UltraNet's robotic army. He fought against the Human rebels and was highly skilled at taking out his targets until Sergeant Cortez managed to open his head and access his computerized brain. He adjusted his settings to make him think that he was an ally of the human rebels. R-110 aides Cortez and hacks into a computer terminal to help Cortez control a massive GOLIATH SD/9 robot.

After Cortez reached the base R-110 helped him access locked doors by hacking into the computer locks. When he hacks into one computer he is infected with a computer virus that grants him a new, more human personality. He is tougher, more gung-ho and much more humorous then he was before. He provides cover for Cortez as he headed up the elevator to destroy the TimeSplitters and he eventually hacked into the teleportation grid, allowing him to rejoin Cortez shortly after he defeated Splitter Crow for the first time.

When he travels back in time Cortez decides to take R-110 with him. R-110 accidentally falls down a pipe and doesn't appear until close to the end of the level. He attempts to go with Cortez to save his past self, but Cortez tells him to stay behind due to the fact that R-110 was simply too bulky to fit into the Time Assassin disguises.

R-110 appears once more to aid Cortez in his final battle against Splitter Crow. He gets killed in the first round by a laser blast from Crow but Anya activates a time loop that allows Cortez's past self and another R-110 to appear and defeat Crow.

R-110 travels with Sergeant Cortez back to his time and the General is extremely happy that Cortez has brought back a robot. However, due to the destruction of the Time Crystals, R-110 ceases to exist and instantly disappears, much to The General's disappointment.

At first, R-110 is just like any other robot. He does whatever he is ordered to without question and speaks with a robotic voice. However, after he receives the virus, he gains a massive personality change, and behaves much more human-like. He enjoys destroying other robots and often taunts his enemies before taking them down. Despite being somewhat dim-witted, R-110 remains loyal to Cortez, and is even willing to risk his life for him, despite the latter being a human (a race which R-110 has a deep hatred against). 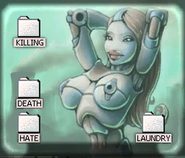 The screen on R-110's monitor.
Robots