The Plasma Grenade is a large ball of fiery plasma that sticks to the first thing it hits when thrown, such as the walls, ceilings, floors, and other players.

The Plasma Grenade exists in TS2, but could only be used through the alternate fire function of the Plasma Autorifle.

It has a fairly large blast radius, and can do a lot of damage. It is also adhesive, meaning it can be stuck to any surface, including living targets.

When a bot is stuck with a Plasma Grenade, it will flail about and run in a random direction, occasionally towards the player who threw it. Similar to when you light a bot on fire with a Flamethrower.

The Plasma Grenade takes considerably longer to explode, and has a low blast radius, and thus is less favourable than conventional grenades. 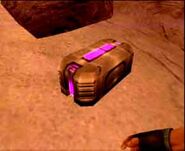 Add a photo to this gallery
Retrieved from "https://timesplitters.fandom.com/wiki/Plasma_Grenade?oldid=47384"
Community content is available under CC-BY-SA unless otherwise noted.