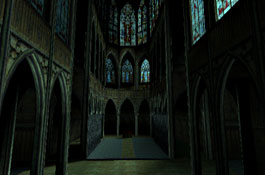 Notre Dame is the third level in TimeSplitters 2's Story Mode. In this mission, you become Viola and fight off zombies and members of Jacque de la Morte's cult in order to save the Maidens and defeat Jacque once and for all.

Night falls on the île de la Cité and another Parisienne maiden screams within the cold stone walls of Notre Dame.

The rivermen talk of a crazed madman leading a cult of undead followers. Who is this Jacque de la Morte? What devils does he worship? And what black magic does he wield?

You must release the damsels in distress from the dark vaults and make your way through the Cathedral to confront Jacque.

But hurry! - the full moon signals another Black Mass and who knows what demons might be summoned within Our Lady's hallowed halls?

"From where you start turn right around the corner and left around the next one. A zombie will come ambling towards you, so take aim and blast its head off. Walk up to the body on the floor and it will rise. Blast its head off too. Go forwards and you will see a path to your left and some ammo. Take the ammo and go left. At the far end of the room is a lever you should activate. Immediately turn, as a zombie will be coming towards you. When its head hits the floor turn left into a sewer-like hallway through a gap in the wall. Another zombie will greet you, so shoot it and head down the circular hallway and pull the lever on the left to open another grate. On the other side is a zombie - kill him - and some steps. Ascend them and shoot the zombie who spawns halfway up. Don't forget the armour lying on the floor either.

Now ascend the spiraling staircase and enter the wine room at the top. Collect the ammo in front of you and walk to the other end of the room. Stay well away from the barred doorway - a moment or two later it blasts open and flaming zombies rush into the room! Stay well away from them (catching fire kills you). Eventually they will burn to death. Go through the open doorway and you'll find yourself in a crypt. There is ammo on the floor and a chained maiden up ahead. Go up to her but DON'T RELEASE HER! There are zombies around (like the one on the left right now) who would kill her. Eliminate the zombie on the left then turn back to the maiden. Take a moment to admire her ample bust then free her with the action button. Now turn the corner and you'll see another one chained up ahead. There is also ammo on the floor and armour in the cell on the left (shoot the lock to get it). Then go up to the maiden and decapitate the two zombies who appear on the right. Rescue her and turn the next corner.

Kill the sewer zombie further ahead and start climbing the small flight of steps on the right. A crypt zombie will come down, so kill it first. Then climb the next flight of steps and kill another crypt zombie before entering the church itself (you'll get the message "time crystal located"). Look up to the ceiling - a girl is chained up there. Before you rush to her rescue kill the two undead priests who appear to be praying amongst the seats. They leave you Luger ammo. Further up from the seats is the time crystal on a pedestal. Collect it to finish that objective.

Now go over to the door at the opposite end of the church. Kill the undead priest along the way and collect the armour inside the small room at the other end of the church. Then turn right and down the corridor to a 2x Luger wielding undead priest. Grab the guns and run up the spiraling staircase. At the top is another undead priest and two ropes. Pull either to lower the damsel in distress to safety. Then go back down to her - the hunchback (as in "The Hunchback of Notre Dame") will help you fight off a few zombies (eight in total) which now appear. When you've fought them off he'll thank you profusely and you'll complete another objective (rescue all maidens). Now follow the hunchback and the maiden all the way down to the sewers, then leave them out of sight for a minute. When you return you'll find some shotgun ammo and your secondary objective will be complete.

Return to the church and go through the door opposite where you enter. You'll come to a spiraling staircase with some armour at the bottom and some ammo halfway up. You will then come to a small room with a cross in it, and a doorway at the other end. Go through and you will face the portal daemon (new objective: kill the portal daemon). There is shotgun ammo on both sides of the balcony if you need it. To kill the daemon aim at its head and shoot continuously, occasionally stopping to dodge the red laser stuff he launches at you. When he dies exit through the door on the other side of the balcony. There is armour through here (do you really need it?!) and another door which leads onto the roof of the cathedral. Out here you'll be confronted by three undead priests and a scourge splitter. Finally, Jacque de la Morte appears, declaring that you can never kill him. Prove him wrong by pumping a few shotgun shells into him to end his devil worshiping antics. Then turn around and exit through the time portal. Mission complete!"

Unlike most other missions in Hard mode there is no extra stuff to do - the layout is the same as in Easy. However, there are many hordes of zombies who come in greater numbers than before, and do far more damage. Watch out for the Sewer Zombies' acid spit attack - they now have long range damage, so surviving is not just a case of keeping your distance. Finally, you'd better be well practiced at making quick, unaimed headshots because you're going to be aiming for each bullet to hit a skull.

Walk into the middle of the first chamber then run back to the start. All three zombies should get up to follow you. Blast their heads off. Follow on to a turning off to the left. Enter it and run to the other side of the room. The three zombies here will get up, and you should gun them straight down again. Pull the level then return to the main route. Follow through a doorway to the sewer area. Walk along the stream, but be sure to take out the nasty zombie on the right. The first grate ahead of you will be open. Use the lever on the left to open the second one.

Go up to the dry platform on the right and kill the zombie who appears. Collect the armour on the floor and go through the small doorway in the wall. A zombie stands at the bottom of the stairs and another spawns halfway up. At the top of the stairs is a sort of cellar with wine everywhere. Walk up to the far end of the room and cautiously approach the door. It will suddenly explode. As soon as this happens run back to the entrance, weaving between zombies. The door is locked, so you just have to stand your ground here. Turn around and deliver those head shots you're so good at. Be particularly careful about dodging fire zombies. There are six undead in total, but some may be consumed by flames. When they're redead exit the room from the other side.

You'll find yourself in a crypt full of gothic arches. There are four chained people in the area, but only three are maidens. One is a changeling - you'll be able to tell because it will be facing down. Shoot this, don't release it. Every time you approach a maiden about four zombies will spawn. Always kill all zombies in the area before releasing anyone, and ensure that the zombies don't attack the maidens - if one dies, it's mission failed.

Walk into the first square piece of room and five zombies spawn. Stand so as to shield the maiden then shoot them all. Advance to the place with cages on the left and right. One will contain a chained person. Shoot the lock, enter and kill the zombies who spawn. Take a right and another chained person will come into view. Shoot all zombies who spawn and run up to the final victim and kill any remaining undead. Now go around releasing all maidens (kill the changeling) then run up the small flight of steps in the wall near the last maiden. As you ascend the steps a crypt zombie appears. Kill it and go up to the doorway behind its body. Checkpoint.

You are now in the main hall of Notre Dame. Go left and you'll see a maiden hanging from the ceiling. Behind her, in the pews leading to the altar are several undead priests. These guys have loads of stamina, and head shots don't kill in one go. Keep blasting away at one until it goes down, while strafing, then repeat for the next one. You can collect the Time Crystal now if you want, or later after helping the hunchback. Either way, run to the only open door in the chamber (other than the one you arrived through) and run up the steps. There are zombies on the way up, and a priest at the top, so be careful. When you reach a balcony overlooking the cathedral pull the rope (either) to lower the maiden.

Go back downstairs again to find the hunchback kicking zombie ass. Help him by picking off some offending hellspawn. When the threat is dealt with one objective is complete. Follow the hunchback downstairs to the sewer area (pick up the body armour in the crypt that I omitted to mention so as to force you to save it for later). He disappears, leaving you some shotgun ammo and a complete objective. Go back upstairs and take the newly opened door.

There are three zombies up the spiraling staircase here. The last is on fire. To avoid taking damage and being turned into a frazzled pyromaniac you'll have to run back downstairs then kill the zombies when they appear. Slow but safe. Run to the very top - you'll arrive in some rooftop rooms. Just follow the path until you reach the large balcony above the cathedral.

This is the hardest part of the mission. The Portal Daemon appears as usual, but he's polished up his act for Hard mode. Aim upwards and shoot one shotgun round at him then aim at head height and shoot the undead priests and zombies who will have congregated around you. Repeat until the daemon dies. There is shotgun ammo at the far end of the room and believe me, you're going to need it. When the daemon goes down exit through the other door.

You'll soon come to the roof of Notre Dame itself. There are undead priests everywhere, and Jacque de la Morte awaits you. Luckily he hasn't evolved much so pump away with your shotgun and he won't even shoot back. The Time Portal opens now so dodge the Scourge Splitters and finish the mission.