Start a Wiki
Nikolai is a private in the Arctic Forces guarding Oblask Dam.

After hearing gunshots in the lower levels of the facility, he goes to explore the underground labs with Sgt. Shivers. They encounter a zombified soldier, who kills them both. He later appears as a standard zombie in the area where he was killed. 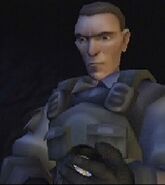 Nikolai in Timesplitters 2.
Add a photo to this gallery

Military
Retrieved from "https://timesplitters.fandom.com/wiki/Nikolai?oldid=45542"
Community content is available under CC-BY-SA unless otherwise noted.