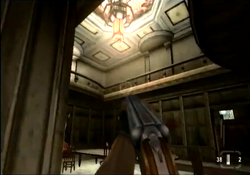 In the Mansion Of Madness, Cortez teams up with Jo-Beth Casey in order to find the young incarnation of Crow.

Anya has traced the Brotherhood of Ultra Science to an isolated creepy Connecticut mansion house in 1994. There's no time to lose - Anya's research has revealed that the mansion will burn to the ground on this very night! Good news is that Cortez has a resourceful new (girl) friend to help him out, the very capable Jo-Beth Casey, the bad news is that the mansion is infested by zombies. Eugh!

Note that the weapons in these two stages will all be civilian-legal (except the flamethrower), meaning they will be barely enough to deal with the hordes of undead and other monsters. Good shooting is necessary as well, since zombies can be killed much quicker if their heads are destroyed (this is a change from the multiplayer class of bots). Emptying ammo into the body of a zombie will only make a worse-looking zombie, so be prepared to turn off your auto-aim if you run through 20 shells on a single zombie.

Enter the mansion and pick up the flamethrower on the ground. Use it to fry the black ghosts that come downstairs after the scientist is killed. On normal and hard, burst fire this weapon or you will run out of juice very quickly. Head into the parlour and pick up the baseball bat. Use it quickly and repeatedly on the zombies in the room and if you sit near where they drop down, you can probably deal with the majority of them before they can get to Jo-Beth. Be sure to pick up the revolver in the corner of the room before moving on. The ghost in the next room is a trap. Keep the bat handy and inch close to the fireplace. The blaze that comes out is the trap. The flaming zombies is merely an annoyance. Take them out and head out into the garden, flamethrower equipped.

The "graboids" (from Tremors) are vulnerable to fire when the appear above ground. A constantly respawning flamethrower is in the garden's corner (near the steps). Head out and run backwards. The enemies come through the ground and are momentarily stuck, allowing Cortez to fire. Kill all six or so worms and the scientist will talk more about the mansion. During the fight, the fire caused by the ghost will have died, allowing you to continue. Before leaving the garden, check the hedges for a revolver if you missed it before.

The room before the dining room has two shotguns. Jo-Beth will now have a shotgun (the game gives it to her for free). So Take them both and get ready for some undead fun. Enter the dining room and head to the wall opposite the deer head trophy. The zombies who rain down can be decapitated while they are on the ground or getting up. Kill the ones with guns first, then the ones closest to you and Jo-Beth. When the "surprise" comes out of the wall, back up and empty your weapons. The revolver should have enough ammo for a later boss fight if you only use it here. The shotgun also works. Just don't set the mini-boss on fire, or it will ignite and attempt to kill you. Hide in the wall cavity from which it emerged and you will be apparently out of its reach.

Head upstairs and kill the zombies in the dining room's second floor. If left alone, they come out when the other zombies are attacking from the front. Two tips to help you survive. Survival Horror Tip 1 - "sleeping" zombies are enemies (the reticule turns red) but they cannot be killed until they are activated. Wake them from their dormancy by applying a burst of flamethrower, then the shotgun. Survival Horror Tip 2 - those neat looking wardrobes and nightstands have power-ups in them. Open and inspect each one; making a note to come back to them if Cortez has low health.

Go through the rooms on the first floor and climb the spiral stairs in the library to the second floor. Check each room for various references to Carrie, Psycho, Poltergeist, Firestarter, and other fine horror schlock. Jo-Beth will momentarily leave Cortez when a horde of beetles attack a scientist in a cut-scene.

Use the flamethrower to kill the beetles in small bursts. If you don't hear the squealing and popping, then stop firing, or you'll run out of ammo and the swarm will kill you. A second flamethrower is at the end of the hall, next to a dormant zombie. Deal with the problem and move through the small dining room to the attic.

The dormant zombies in the attic can be activated and decapitated if you use the TK glove and flamer judiciously. You can get rid of at least three of the zombies before entering the attic "for real" and triggering the fire shooting ghost. The ghost can't be killed, so kill all the zombies and move to the next area.

Use the flamethrower and shotgun trick to wake zombies and waste them. Blast all the undead and meet the scientist in the next room. A flamethrower can shut his yap up. Be sure to claim the medical kit before completely going down the stairs. Cortez will not be coming back. The zombies down the stairs appear just before you reach bottom. Kill the alerted zombies first, then ignite and wake the dormant ones. Take them out at the top of the stairs (luring them up lets you get the first shot in).

Head downstairs and you'll empty to the rear garden. There's only one way out. Equip and reload the revolver and shotgun and take the medical kit in the small stock room before moving outside.

The garden pool outside has a boss fight. Although intimidating, all you really need to do is move right up to the rim of the hole and move left while tilting the aim just enough to keep up with the yaw. Fire anywhere on the monster and you do damage. Now would be a good time for the revolver since you won't be really using it afterwards. If you are properly strafing, the boss cannot hit you when it swipes with its claw. When the monster is about to die, back up and waste it to avoid the "deathblow". Kill the monster and meet up with Jo-Beth, who, being such a nice perky little slut, moves the junk away to continue past the previously locked door.

There are some more enemies in the kitchen that need to be cleaned out. Since some do not have heads, you will need to use up the shotgun, bat them, or set them on fire to kill them. Head through the kitchen, kill the enemies in the meat locker and end the stage.

Cut dialogue reveals that the level originally featured Edwina's Ghost in a more prominent role, actually speaking to the player and seemingly being on their side. At first, the level had the ghost giving the player miscellaneous advice, such as teaching them the usage of the flamethrower: "Fire is nature's sword, it destroys the unnatural.". The player would then need to do a quest that involved fetching various objects to their "resting place" in order to give the ghost peace.

Likely fearing that a fetch quest would not fit the nature of the game, this plotline was changed to involve killing a demon that inhabits the ghost's body. There are 3 alternate takes of this line of dialogue, of varying lengths. There is also a line of dialogue intended for the demon the player would have to kill.

In the end, this story was scrapped and all of the ghost's dialogue was cut. The ghost was reduced to appearing as a minor hostile NPC and miniboss in the Mansion.

Cut sounds and cut dialogue from Jo-Beth Casey imply that bats were originally featured in the level. It's possible that the batheads replaced them. 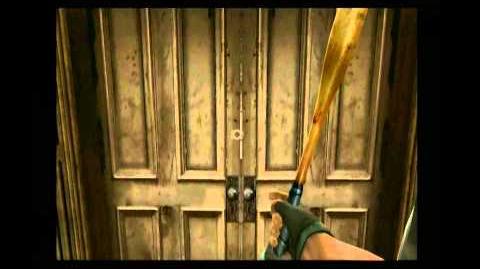