The Henchman is a character from TimeSplitters 2 and TimeSplitters Future Perfect. They are one of Khallos' types of henchmen, being the lower-level male recruits. They are the only type of henchmen that have appeared in more than one game, as the Dark Henchmen of TimeSplitters 2 were replaced by the Elite Henchmen. The clothing is basically the same in both appearances. They wear night vision goggles and have a bag strapped onto their back, as well as gloves and a baseball cap. The major difference of the two appearances is the colour of the uniforms. Also, the TS2 Henchmen had American accents, while in TSFP they were Russian.

The Henchmen appear in TimeSplitters 2 as generic enemies in the Atom Smasher mission. Their appearance in this game is their latest (time wise) thus far, and assumed latest ever possible due to to the fall of Khallos. There were two uniforms; yellow and black. The Dark Henchmen attained their rank by being the first to choose their uniform. Most other Henchmen were stuck with the yellow.

Apart from canon, the Arcade League matches Superfly Lady and Hangar Hats Off! feature the Henchmen at the Hangar. The challenge Fight Off The Living Dead presents a Henchman fighting off hordes of zombies that were the result of another of Khallos' schemes. The Henchman also appears in the Hangar, Site, and Misfits bot sets.

Three years prior to the events of the Atom Smasher of Khallos Island, Khallos had four classes of henchmen, and they all wore navy-blue and black costumes, with both male and female members. The only notable difference from their appearance in TimeSplitters 2 is the colour scheme; the black stripe has become yellow and the yellow of the uniform a grey-blue.

The henchmen appear in Khallos' plot in which he was partnered with Jacob Crow in The Russian Connection and The Khallos Express missions. Henchman also appears in the Rockets 101 match, and in the Don't Lose Your Bottle Challenge, where they play the role of drunkards. They feature in the Henchmania bot set.

Archibald Khallos and Jacob Crow worked in conjunction with each other to achieve their goals of world domination. Crow and Khallos, sharing the henchmen, made their plans to use stolen French nuclear weaponry to start a third World War. The Henchmen fought off Tipper and his odd companion, Cortez, but failed as the two got past them. Some Henchmen escaped alongside Crow through a time portal, acting as his force in other time periods.

Upon the many trains running along the tracks, Henchmen lay in wait. Tipper and Cortez managed to board one of the trains and defeat all of the Henchmen standing between them and Khallos. The henchmen fell, the two deactivated the nuclear weaponry, shot down Khallos and pulled the brakes on the train, saving Celeste.

Khallos housed a particle accelerator at his own secret island base, the self-inspired Khallos Island. Khallos had also caught Agent Harry Tipper, but he escaped. Khallos then activated bombs scattered around the base as a counter-measure. The Henchmen stayed on the island attempting to kill Tipper and stop the scientists from disarming the bombs. However, the elite, dark-suited henchmen remained unable to defend their leader and perished alongside him. 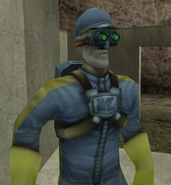 A basic henchman in 1969 from TimeSplitters Future Perfect.
Community content is available under CC-BY-SA unless otherwise noted.
Advertisement