GOLIATH SD/9 is a Robot in TimeSplitters Future Perfect that can be unlocked for arcade mode.

Since he is a mech, he appears to be more stripped of armour and plating, making his appearance more mechanical than the other robots. He has a large engine or cockpit above his torso, and this counts as his head. His feet also mimic cloven hooves, similar to The Cropolite, who is also portrayed as a giant creature in story, but human-sized in Arcade. He has two pincers which act as hands and are used to fire weapons in Arcade, though in Arcade his hands are remodeled to look like R-110's.

In story mode he appears as a giant mech, and you encounter two different ones. The first time is in the Machine Wars level, where you take control of it at the end to shoot down ships to clear a path for you. The second time is in the Something To Crow About level where you fight one as a boss. Goliath is the only UltraNet robot that has an "SD" edition but not an "SK" edition. This could be because the "SK" edition is the giant version, so could not be playable. Also, in Arcade mode, there are some doorways in a few levels, one being Bunker, that you cannot enter unless you crouch. The same applies with the bridge in Chinese to obtain the cloak. 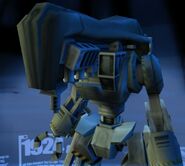