Safe in the knowledge that he has foiled the Time Assassins, Cortez returns to Kronia to find and destroy the source of the Time Crystals.

During the final boss battle, make sure you do pick up some of the ammo lying around, before actually fighting the boss (the ammo regenerates) so you can get an easy starts on fighting the boss. It'll come in handy later. Also, make sure during the battle that you take out Crow's legs. Doing so will allow you to hit his arms without him moving.

With only two weapons to manage, you can be sure that this is a short, short stage. First, take out the enemies in the time machine room with a silencer. R110 can help by shooting most of the enemies, but try not to let it get too shot up.

Head into the room and kill all the enemies in the circular room. The K-SMG ammo and rockets will be your primary weapons so stock up on the ammo now (it will respawn later). Go down the stairs to the mine shaft and kill the enemies there. Note the blue explosive barrels can be moved up to help with the boss fight. At the end of the mine shaft, take the time crystal and head back upstairs.

The boss cannot be damaged except if his arms and legs are shot up. This forces the little green robot sprites from his back to repair the damaged limb. leaving his back vulnerable. Use rockets to break his limbs quickly and then damage his back with gunfire. At half-life, a temporal recursion occurs and you will have a second Cortez and R-110 to help out. Drain the boss' life by using hit and run tactics and you walk away victorious.

Ammunition can be pulled from the edge of the arena using the TK glove. This helps since you do not expose yourself to the boss' weapons. Rockets are the best way to damage the limbs, since they take time to reload when you are damaging the boss' back. Alternately, you can fight from the second floor of the arena, but that often means your dumber AI bots will take the brunt of the battle. And if either of them die, it's game over. 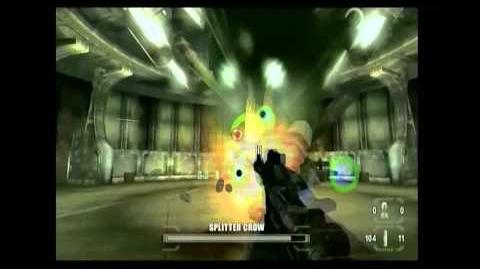