View source
watch 01:36
We're Getting Mutants in the MCU - The Loop
Do you like this video?
Play Sound

Duckman Drake is an anthropomorphic bipedal duck who stands at human height and possesses human-like qualities; his wings are able to grip weapons like hands.

Duckman Drake is one of the few characters to appear in the first game but not in the Story mode, and like the others, he has a cheat dedicated to him: Enemies turn to Ducks. The Duckman Drake character is used as a hunted target for the Section 2 Challenges. Though they are being hunted, they are still able to handle weapons.

Duckman Drake returns in his second game once more as a target to hunt and as a Classic character. Though Mr. Big does not appear, Big Tony, a character with similar qualities to the former, appears and takes his place. This time, however, only one Arcade Challenge is reserved for him.

Duckman Drake returns in TimeSplitters Future Perfect, again as a Classic character, but has no Duck-hunting missions, and no proper role within the game.

Render of Duckman Drake and Dr. Katje Nadir in TimeSplitters 1. 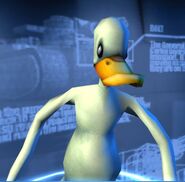 The Duckman's accidental white feet in an early build of TimeSplitters Future Perfect.
Community content is available under CC-BY-SA unless otherwise noted.
Advertisement