Carrion Carcass is a character in TimeSplitters Future Perfect. They resemble the corpses of dead cattle, with their fronts ripped open and their innards ripped out. Oddly enough, they're still capable of wielding weapons, despite lack of hands.

Carrion Carcass can be found in the Mansion Of Madness, located in the kitchen just before the end of the level. Once you step into the kitchen or start attacking, they will get up from the floor and run after you. Carrion also features in a Arcade League match, a survival Challenge and three bot sets.

In Story mode, they seem to be very weak against Baseball Bats, going down in just 2 swings. From anything else, they can absorb more damage before going down. 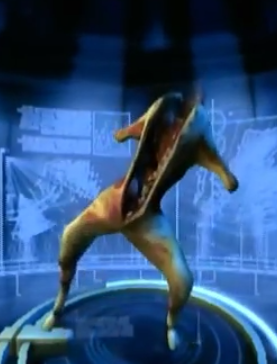 Retrieved from "https://timesplitters.fandom.com/wiki/Carrion_Carcass?oldid=46488"
Community content is available under CC-BY-SA unless otherwise noted.