Captain Ash is a recurring character, having appeared in all games in the TimeSplitters series thus far, and having a role in each game's Story. In each of his appearances, Captain Ash has worn boots with a brown jacket and blue trousers. His hair is blonde and he sports a moustache.

Little is truly known about Captain Ash's background, though it is suspected that he served in the infantry during the Boer War towards the end of the 19th Century as a teenager, before becoming an officer of the Royal Flying Corps (judging by his clothes) in World War I. It is important to dispel the confusion regarding Ash's title as Captain as one being under the Royal Flying Corps, where the title of Captain does not exist. However, it is very possible that he had become Group Captain. After the war, he retired from the military to set out on adventures of his own, travelling the world. It is then most likely that he assigned himself the title of Captain for simplicity's sake.

Captain Ash appears in the second game as one of the primary Story protagonists that Sergeant Cortez morphed into. The most notable difference in appearance from the other games is his hat. This version is the youngest representation of Ash, although it physically appears to be his oldest incarnation.

Captain Ash returns for another game and, for a third time, he is involved in the Story. Unlike every other secondary character featured in Story, he is the only one to appear in only one level. However, the timezone he features in (1924) has the most appearances in TimeSplitters Future Perfect's storyline.

In TimeSplitters 2, Captain Ash, now inexplicably English, appeared in the Aztec Ruins in Guatemala, alongside the Jungle Queen. He set out to retrieve the time crystal, under the form of Sergeant Cortez, hidden at that location with the aid of a group of mischievous - yet helpful - monkeys, encountering Aztec Warriors and Stone Golems. However, his military training came in handy and he managed to enter the Lost Temple of T'hochek and find the time crystal.

In the third game, he was shown again in the Story, during 1924, in an apparently hushed up incident involving what appears to be Russian soldiers taking a Scottish isle for an unknown reason at that point in the game. He was still madly in love with the Jungle Queen, and was on a mission to rescue her from the island before the British Navy attacked the Russian soldiers stationed there. While rowing out to the island, he encountered Sergeant Cortez, who had time travelled to that location and period. The two partnered up, stormed the castle on the island, and rescued the Jungle Queen. However, Cortez went on while Ash left the island, apparently rowing into the sunset with the Jungle Queen.

The first recorded appearance of Captain Ash is, ironically, his last one chronologically. He is based around the Tomb story level set in Egypt, as the playable male protagonist. Alongside his partner Lady Jayne, Ash ventures into the tomb in search of an ankh that can be used to stop a ritual. At the end of Ash's adventures in Egypt, it is uncertain what happened to him, but it is likely that his adventures were far from over.

Render of Captain Ash and Cultist in TimeSplitters 1.

Render of Captain Ash in TimeSplitters 1.

Wallpaper of Captain Ash and Jungle Queen in TimeSplitters 2.

Captain Ash in the Aztec Ruins in TimeSplitters 2. 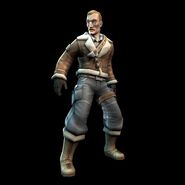 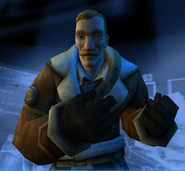