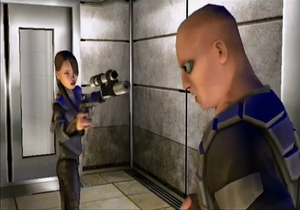 In Breaking And Entering, Sergeant Cortez infiltrates U-Genix to find out more about Jacob Crow.

At last the Time Traveler has a name - Jacob Crow, a crazed genius carrying on his perverted research across two centuries. Firstly as the father of the Brotherhood of Ultra Science and then a hundred years later as the founder of U-Genix. Crow might think he's safe but Cortez is hot on his tail. In 2052 the U-Genix Corporation is under investigation for illegal research - sounds like a good time to sneak in and find out what's going on.

The amount of security cameras make this stage annoying since the sentry guns can aim and attack you with infinite ammo while you have to plug away at it slowly. On easy, there are less cameras, laser traps, and robots. On hard, there are more cameras, laser traps, and robots. Cortez's first job is to move to the corner of the landing pad and use the TK glove to pull the mag charger near the maintenance worker. This weapon is crucial to destroying the robots inside the building, so use it only to destroy robots, not the turrets or cameras you can blast using the LX18 pistol. Use the mag charger to spot and drop the patrolling robot on the ground below. Note -- the weapon doesn't fire through walls, so aim carefully.

Head down the ramp (kill the enemy by using a punch from the back). There is a camera on the corner of the building that can detect Cortez at the end of the ramp. Use the mag charger's secondary fire to locate the camera and destroy it using the LX18. Turn left at the end of the ramp and if you are playing on Hard, watch for the next camera (it's in plain view). Cortez will need to blast the laser control terminal to access the security room on hard, but on easy and normal, just destroy the camera overlooking the security room door and head around the other way.

Disable the cameras and laser traps in the control panel and open the roof access option. This opens the door leading into the building. Head there now, avoiding the robots on the roof if you did not waste them.

In the stairwell, destroy the control panel at the bottom of the stairs to bypass the security gun. There are enemies inside the maintenance area; head left to headshot the first one and keep the LX18 out to deal with cameras and enemies. The mag charger's vision mode lets you see if any cameras are ahead you need to worry about.

To get past the laser barred door, trigger the door to open and blast the control terminal. The other picture we included is a satisfied "braining" of a maintenance enemy. If they sight Cortez, the alarm they sound will cause all the guns in the area to become active.

Use caution with cameras -- they set off alarms as well. IGN recommends leaving the mag charger on secondary and switching to it only when you need a scan or when fighting a security droid. Note these droids are tough on hard. Be ready to expend about four to five mag charger shots on the bot if they sight you. On easy and normal, you can expect to spend less. Since you will not get any more mag charger reloads, use that weapon only for droids.

Head down the next floor and locate a small security room. Note that if you trigger an alarm, a security squad will be dispatched to investigate, so try to kill enemies quickly or quietly (preferably both). Grab the SBP500 and time grenades there. The security room lets you watch Amy Chen "do stuff". Protect her using the turret gun and raze the areas near the door and the windows. Beware the blind spots on the sides. Once this is done, you can go down one more floor.

There is a security droid on the next floor. Drop it using the mag charger fired through the glass. Falling back on the stairs mean you are trapped against the laser barrier or you have to egg it on. Get by the locked doors by using the old Perfect Dark cleaner bot ploy. Access the janitor console (it's on the hallway corner) and turn on the Suck-O-Bot. Follow it to the conference room.

Anya recommends starting a fire to short out the electronic locks. Do so by shooting the triple tanks of inflammables in a small side room. Should be obvious. Down the guards who swing by and take out the SBP500. Fight off the ambush in the larger conference room (the one razed by the armed chopper) and watch for the droid that comes in the other end. Time grenades can help you deal with the fast moving enemies if you need it.

Head to the next hall and note the washrooms (water closets). The womens' room has health and armor if you need it for later. Catch up with Amy Chen (a four star bot in multiplayer) and follow her to the next destination, fighting off enemies.

Amy will head right into an office; Cortez should equip the mag charger and enter the opposite office to destroy the droid. It will attack later if left unmolested. Meet up with Amy in the office and fight off the goons assaulting her nubile minx body.

After destroying the ambush, Amy cracks the code to the next floor. Head back to the restrooms you saw earlier and stock up on armor and health before meeting Amy on the lift. Go down with her to the next floor and stay alive.

The Dispersion Gun is a good all around weapon for guards and bots, if you are not sure you want to use the mag charger (might as well, Cortez loses it the next level). Protect Amy as she hacks Crow's terminal and watch out for more droids and enemies as you head back to the lift. Reach the lift to end the mission successfully.