Badass Cyborg is probably the most well-known cyborg of the series, appearing in all three games to date, and is one of the few characters to do so. His role, however, diminishes with each installment.

Appearance-wise, Badass Cyborg's hands are hook-like; his right arm is fully mechanical, while his left arm is mechanical up to the elbow. The left side of Badass Cyborg's face is completely mechanical, with a gasmask-like mouth filter and a scanner-like fixture over his left eye. He has a tattoo his stomach, which says "Grimy", and also wears denim jeans torn at his knees, with black tennis shoes.

Badass Cyborg appears as one of the generic enemies of the Cyberden story mission, alongside several other cyborgs; Badass Cyborg, however, is the only one of the four to appear in more than one game in the series. Aside from his role in the story, Badass Cyborg also features in two challenges and two bot sets.

Badass Cyborg returned in TimeSplitters 2, as one of the TimeSplitters 1 classic characters. This time around, he doesn't feature in the story of the game; he does, however, star in a challenge, Badass Buspass Impasse, which is based around the original TimeSplitters story format. He also appears in two bot sets.

Badass Cyborg returns for yet another appearance in TimeSplitters Future Perfect, and is one of few characters to appear in all three games to date; this time, however, he has no real role in the game, only featuring in a single bot set.

The cyborgs made an attempt to stop Deacon Swain and Chastity Detroit from retrieving their secret plans. It is unknown what plans the disk contained, but nonetheless, Deacon and Chastity raided the Cyberden and successfully retrieved it, killing the cyborgs in the process.

Render of Badass Cyborg in TimeSplitters 1. 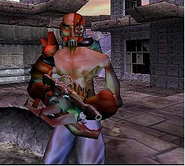 Badass Cyborg at the Warzone map in TimeSplitters 1.