For the Arcade Map, see Aztec. 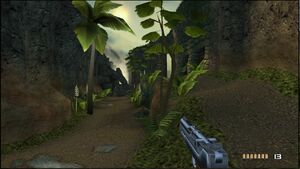 In the Aztec Ruins level in TimeSplitters 2, Captain Ash encounters a lost Aztec civilization and battles them to get the Time Crystal in and around the Lost Temple of T'hochek.

In the deepest Guatemalan jungle it seems that his quest has become to fruition. Finally the ancient jade crystal artifact will occupy pride of place in his trophy cabinet.

But the darker forces are afoot. A lost tribe guards these legendary walls and natives speak of mighty elemental Golems and sentient simians. In whispers, some even say that gods from another time walk among them...

When you start a monkey will be in front of you, running. Follow him/her/it up the hill then through a winding tunnel. You'll come to an open area with walls. Take a left and you'll see many monkeys hanging around. Kill them if you feel cruel. Go left again through another tunnel and round the next corner. You'll come face-to-face with a native. Shoot him before he hits you with a crossbow bolt then collect the weapon he leaves. Go back to just before this corner and put the tip of the crossbow into the fire. Without shooting or reloading (which puts out the fire) advance to the wall opposite where you enter this area then take a right to go down a lower path.

A tree thing (similar to Treebeard in the Lord of the Rings: The Two Towers, for those who have seen it) will appear so immediately burn it with your flaming arrows and avoid it at all costs. Getting burned will incur a slow, painful and inevitable [virtual] death. Round the next corner and another native indian appears. He's not friendly, so incinerate him with your souped-up crossbow. Ignore the golden carved gate for now and turn right down another path.

Follow this tunnel and you'll reach two doorways. Look through the left one and you'll see another tree-thing. Burn it too. Now reload and go through the doorways and to the other end of this small rectangular courtyard. (NOTE: On the left here is a beehive. A few of these are scattered about the level. Avoid them, as the bees follow you and sting you. The hives can be destroyed with burning arrows). Turn left down a corridor which leads to an area with painted pillars. Watch out for the indian on the way. Here, quickly kill another native then cast your aim upwards. On the third pillar on the left is a monkey who throws explosive watermelons at you. These hurt badly, so take out your more accurate Luger and blast away. The monkey may fall off the pillar. Pass through the courtyard and into the next. Dodge the beehive and ascend the ramp on the left.

Turn right from here and cross the rope bridge you saw in the introductory FMV sequence. Follow this tunnel to a lever which you should activate. Watch out for the watermelon-toting monkey on the other side of the bridge and the native who appears after the lever is pulled. Remember that gold door I told you to ignore? Now backtrack to there to enter the inner sanctum of the Guatemalan jungle. The easiest route back is right from the bridge and just follow the path. The door is on the right. You will also be challenged by three more native indians on the way.

Through the doors is a hole. Don't worry - just drop down it and follow the path. You'll come to the entrance of a temple with two monkey guards. Dispatch them with your Luger and enter. Turn left and shoot another indian and marvel as the music changes to a more suitable singing style. Go further into the temple and descend some steps. Another native awaits on them. Behind the staircase is a hidden lever - pull it and go back to the bottom of the steps. Advance into a small chamber and look on the right for armour. The left path leads to some steps. They go down for a while in a cubic shape, and you meet a monkey on the way. Kill it to make sure it doesn't lob any more melons. At the bottom go left to the altar and collect the crystal (objective ticked off).

Now you'll have to kill some stone golems, and I'll tell you now that ammo of any kind has no effect (in Easy at least). To kill them, you will have to walk on the patterned tiles that appear to stick out of the floor. These open wooden trapdoors through which you must make the golems fall. I recommend that before starting this you kill the monkey on the pillar on the right from where you enter to avoid melon-pains. Then go to the left side of this large chamber. It is impossible to write a walkthrough for killing the golems; you have to work out how to trap them yourself, and it may take a few attempts and repositionings to get them to fall in. Just make sure that you yourself don't accidentally commit suicide. I find it easiest to start with the golem on the left then turn the corner and take the next one out. Go through the small stone corridor and you'll arrive at another similar area with another monkey. Make sure you kill it first. Then destroy the final golem to be told to escape through the Time Portal. It appears in front of the door at the far end of the room.

This one can be quite a challenge, so memorizing can be a good thing in this level. Head after the monkey into the large courtyard. Duck through the tunnel on the left. Ignore the melon throwing monkey. There are lots of these in Hard mode, and unless I specify just ignore them. When you get to the next area there are two Indians waiting for you. Kill them and take their crossbows. Go left to the small fire and light the bow on it. Shoot the two wasp nests in this area, keeping your distance. When they burn follow the path and a Wood Golem appears suddenly. Shoot him and run away until his body burns down.

Go up the path and you'll be opposite a golden door. There is a guy here. Kill him and the next one further up the tunnel. Light your crossbow on the torch on the wall. Burn the next golem who appears in the new area and use your burning crossbow to shoot the wasp nest on the right. Head down the path hidden by the wall and follow it to "The Pillar Room". There are Indians here, and, worse, three grenade-melon toting monkeys. Kill the Indians first, run into the courtyard behind (ignore the nest) and climb the stairs. You have a view onto the column monkeys, but they can still hit you. Kill them all and drop down again.

This is the part that everyone has trouble with. To open the door at the top of the ramp, enter the pillar room and activate a column. You'll notice that it turns 90 degrees. You'll also see little pictures on the columns. Turn them so that every picture is facing another picture of the same type. It takes about three minutes to work out, but when you've got it you'll realize how simple the only puzzle in the game was. Beware, as at different times three Indians will come and attack you. (Alternately you could play it on easy to find the correct combination and note it down.)

When the door opens head through it and over the bridge you come to. On the other side is a lever. Pull it to open the big golden door. A load of Indians come now, but use the Crossbow's speedy fire to outshoot them. Dodge the monkeys. Go out on the right and head back to the golden door. Several guys attack you on the way, but once you reach it just drop through the hole in the floor reach a checkpoint.

Get your Luger ready and head out to the area before the Temple. There are four monkeys, and they're too dangerous to be ignored. Take out the nearest two on the left and right then proceed to the other two. Their melons (the explosive kind) really hurt. Head into the temple and kill the first two guards. There are two more down the steps who don't notice you. Aim just above their heads for a perfect head shot for each. Go downstairs and collect the armour then go behind the steps. There is a lever to pull. Oblige, kill the Aztec who appears then head downstairs.

The first guy you meet is the priest. He has a little more stamina than the others so shoot fast. When you come to a crack in the wall on your right peer through it. Head shot the guard standing on the other side (remember, aim up a bit). Go to the ground floor and look up on the left and right. There are monkeys on pillars again. Kill them to avoid more damage. Now start killing the three golems in this first section of the room. Remember the technique - tread on the tile to open a trapdoor and try to lure the golem into the hole, while ensuring that you don't fall in yourself. Repeat three times then head into the next section of the room. There are two more golems here plus monkeys. You can handle this bit, I'm sure. Use any Luger ammo left to pin the primeval pests and do the golems afterwards.

When that's done head down into the bricked tunnel. There are spikes which slide out of the wall and gore you. Wait for them to move then head through. You'll soon come to a room with a bridge eight faces on the walls. The door closes behind you and you get a sniper rifle. This part is kind of freaky. A random head will spin around to reveal a red-eyed version which shoots a beam at you then closes again. Learn their locations so you can scan the heads after you hear a rumbling noise. Shoot the head that is turned to permanently remove it. Do so to all heads to proceed. This section relies entirely on your own skill - I can't help much. But it isn't too hard.

When all the heads are gone some Aztecs attack you. Kill them and head down a bit more. You'll come to a room which is one long staircase heading down with a boulder at the top. You know what's gonna happen if you go down... Take out the baddies on the left and right with your crossbow. Then run down the steps and as soon as you hear a rumble run to one side as the boulder rolls past leaving you unscathed. Exit at the bottom to reach the final room. Don't worry if you have little health left as if you do this part right you won't get hurt at all.

There are three golems in the room, and a grenade launcher in the corner. Get that and shoot the golems with it when you're at a fair distance. Just keep running away and shooting. They take three shots each. When they die grab the the Time Crystal and dodge the 'Splitters as you head for the Portal. 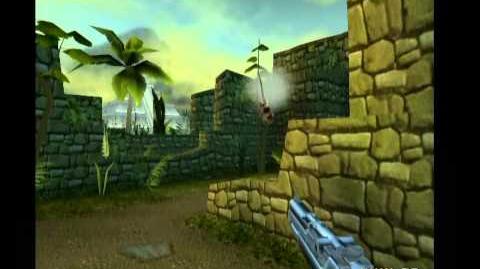 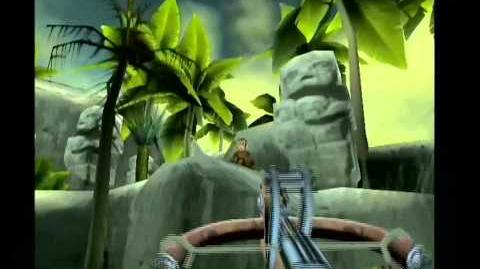 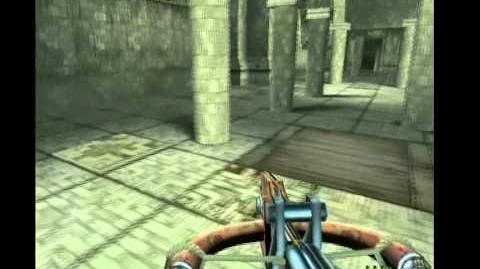