The Accountants are one of the most normal-looking characters in the series. They wear grey suits and ties.

The Accountant makes his only appearance in TimeSplitters 2. In all their appearances they serve as basic civilians, but in the Arcade League mission, Men in Grey, they serve as the enemy with the Consultant and the Lawyer.

A crime lord and owner of the Sunrise Club, known simply as "Big Tony" was causing havoc throughout Chicago. His armed mob were running the streets, while civilians were always in fear. 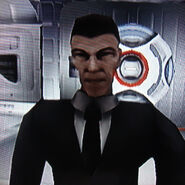 Accountant as he appears in TimeSplitters 2.
Add a photo to this gallery
Retrieved from "https://timesplitters.fandom.com/wiki/Accountant?oldid=46249"
Community content is available under CC-BY-SA unless otherwise noted.